The Woman in Black

Every intelligence operative in Washington D.C. knows her name … but little else.

A tough Navy Seal with a reputation for efficiency, Steve McMillan has heard all the stories about the “world’s most glamorous assassin.” But nothing prepared him for the goddess in tight black leather who now stands before him. Marlena is his new assignment — his superiors in the shadow world of secret missions want him to get information and then turn her over. McMillan is the consummate professional, but dealing with this beautiful enigma is playing with fire. To trust her would be crazy — as crazy as following his burning desire for her to its passionate conclusion.

Because there’s something beyond the yearning in her eyes and the inviting softness of her lips. Dark clouds are circling around Marlena Maxwell, drawing Steve along with her into a lethal game of deception and betrayal. And perhaps the deadliest mistake they could both make would be to fall in love …

“It’s been an hour, sweetheart. If you plan to make a move, you mustn’t make a lady wait.”

He was pinned hard against the wall, the husky, whiskey laced voice drawing in his ear.

Her strength didn’t surprise him. After all, everything he had profiled about Marlena Maxwell showed a woman who knew how to take care of herself. What caught him by surprise was how his body responded to her. From his  table watching her, he had appreciated her tall, sultry beauty. But up close and personal, the appreciation became a growing private interest.

She pushed an elbow hard against his lower back, forcing him to buckle against the wall. “It would save me time if you introduce yourself,” she said, still in that husky drawl. “And I hope you don’t mind. I have to make sure you’re not armed, sweetheart.”

The hard stucco of the building cut into the side of his face. “No problem,” Steve assured her. “Look all you want.”

She slid a hand into his jean jacket, checking for secret pockets. Then her hand slid down his chest to his jeans, obviously knowledgeable about the places a man could hide a weapon.

“Lower,” Steve suggested, reckless desire spurring him now,” and you might find something loaded.” 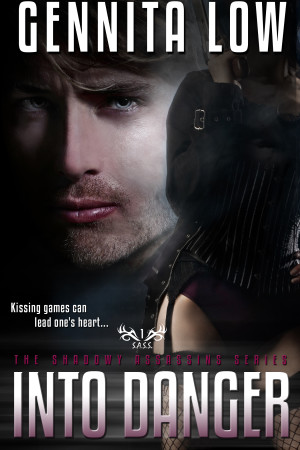