Hawk McMillan, SEAL commander, is on a lone mission. To get close to Dragan Dilaver, a Kosovo kingpin involved in drugs and arms–trafficking, Hawk helped him escape from Asia and return to his former country of Yugoslavia. Now Hawk has to discover where certain weapons have been dropped for Dilaver over the diverse regions of Montenegro, Macedonia and Albania –– not an easy task for someone unfamiliar with the territory. In order for the operation to succeed, he needs a tracker and the only available person is CIA contact agent Amber Hutchens.

Beautiful and smart, Amber has made a life for herself in Velesta, Macedonia and she is more than capable of assisting Hawk in finding the cache of hidden weapons. Despite the danger of exposure and torture, they risk everything in their mission to strike down Dilaver and his ruthless gang –– even their love.

Available in Print, on Kindle, Nook, and at Smashwords

“I was just thinking about you,” she said, pinching off dollops of the dough.

Her gaze swung upward in startled surprise. Hawk stood at the doorway, his eyes that odd glittering color that reminded her of a wild animal. He looked like one, too, his clothes rumpled and stained, his handsome face dusty, covered by several days stubble. There was something dangerous about him. Amber straightened from the table. Why was her heart bursting into a smile at the sight of him?

“Don’t you ever knock?” she asked. It wasn’t opening hours yet. Locks, it seemed, weren’t much of an obstacle for him.

He sauntered in slowly, his gaze traveling from her face down to her floury fingers sticky with cookie dough. She was suddenly very aware of how civilized her surroundings were compared to what he must have been in the last few days.

He stopped in front of her. “Ja sam gladna,” he said softly.

“Want something to eat?” she asked, conscious of the way he was looking at her, as if he was hungry for something else.

She indicated a nearby chair. He sat and watched as she put away the dough and cleared the table. “Are you all right?” She patted on the right side of her face, near the jaw line. “There’s a cut there.I think. You’d better take care of that. It’s caked with dirt.”

She poured a cup of coffee from the carafe. “Cream and sugar?”

“Anything particular for food?”

His eyes gleamed and his teeth were very white against his tanned face. She wouldn’t quite classify that as a smile. He didn’t answer either. The man was obviously not in the mood to talk right now. Another side of him. Where was all that sexy bantering?

She went into the huge refrigerated pantry that kept all the restaurant food and took out anything that would heat up quickly. She glanced back at Hawk now and then and found him watching her with half-closed eyes. She was used to men looking at her-having grown up as the blonde, blue-eyed missionary’s daughter, she had been in countries where her coloring attracted all kinds of attention. Her parents had taught her to treat it like background music, sometimes noticeable, sometimes slightly uncomfortable.

The man sitting there with that intense look in his eyes couldn’t be ignored like background anything. He was too still. Too alive. Too damn sexy sitting there like a wild animal in her spic and span kitchen.

And too dangerous to ignore.

Hawk knew he shouldn’t be here. Not in his current mood. But he couldn’t help himself. He was drawn here as he was to his own sanctuary; his little private place on the island back home. And he wasn’t quite sure why.

His island getaway off Florida was perfect when he felt like this-a little wild, a little melancholy, the need to connect to nature in its most natural setting, without battles and strategy planned ahead by humans. He could sit for hours playing with his fishing nets and going out to sea pretending to be Captain Ahab or the Old Man. Hours and hours of just sitting there enjoying the nothingness of contemplation, his mind
at rest.

But he had a fierce need tonight, after two days of going to battle for nothing. He had never fought for a side he didn’t choose before, nor had he ever killed just for the sake of killing. It had left a hole inside him, one that seemed to be tearing wider. He wasn’t sure why but the thought of Amber in her kitchen was on his mind.

He didn’t want to talk to her on the phone or on the instant message program; he wanted to see her. So he had asked Dilaver to drop him off here when they were heading back into town.

“Doing your own celebration, Hawk, eh?” Dilaver had chuckled with a wink.

Hawk didn’t feel the need to point out that there was nothing for him to celebrate. The only good thing he had done in this trip was to save that widow and her daughter, who had been hiding under the kitchen sink, from being used by the bastards. No one had dared pick up his challenge of a fight, not when they’d seen Dilaver warningly smack the young thug who had carelessly shrugged off the deaths of two of their gang. He had hoped for some outlet to the rage inside.

The battle had been bloody. As he was with Dilaver most of the time, Hawk had to be part of the fighting in a real way. The other side was no better than this side, he had told himself. But he couldn’t help thinking what if it happened to be his SEAL brothers, and that he was still undercover? What would he do then? Such thoughts were dangerous in the heat of battle, and he had cut them off almost as soon as they surfaced and had gone into combat mode.

Driving back into town, with all the noisy aftermath of men high on adrenaline, all Hawk could think about was Amber and hamburgers. He wasn’t a man who questioned his own private needs. He knew where to find both, and he went for them.

And she had been in the kitchen, looking so damn good, he had wanted to cross the room and take her on the kitchen table right then and there. There were smudges of flour on her nose and chin; her fingers looked sexily edible as he watched her knead and roll dough, a little frown on her forehead as if she was thinking unpleasant thoughts.

Something dark and wanting arose in him. The feeling fed that hole inside, a fire in his gut. His whole focus was on the woman and he had to concentrate hard on what she was saying because there was a roar in his head drowning out all superfluous noise except for what his body and mind hungered for.

Here was a woman who wasn’t captured, or underage, or begging for help. Here was someone who had cried outside the way he had cried inside at the sight of those girls being gang-raped. Here was someone he’d had to talk out of doing something that he had wanted to do for the last few months; he couldn’t forget the sight of her dangling on the side of the building with that weapon aimed at the crowd of men. There had been just enough light to see her expression as she willed herself to pull the trigger, one so fierce and sorrowful that he had wanted to hold her in his arms and comfort her, as he needed to be held and be comforted inside. Because he had understood what she was feeling and going through.

Food. She thought that was what he wanted. He waited till she placed the dishes on the table, then grabbed her by the arm. She landed on his lap without resistance. He began devouring her lips.

She was warm and soft, her lips opening willingly for his exploration. He pushed his tongue inside her mouth, tasting her. He couldn’t get enough, putting his hand behind her neck and pulling her even closer.

He reached up with his other hand, caressing her jaw line, her neck, then downwards, until he cupped her breast. She jerked forward, a soft sound in her throat, as he ran a thumb across the thin material covering her nipple. She wasn’t wearing a bra. He pulled at the shirt impatiently, trying to find an opening to get what he wanted.

Her hands stopped his progress. “Hawk,” she whispered. “People can come into my work kitchen.”

“I don’t care. I want you now. Here, on this table. Upstairs. Somewhere, Amber. Take your pick.” His hand was still on her breast and he used his thumb to his advantage. He didn’t wait for her answer. Standing up with her in his arms, he started heading for the door that led upstairs. “You know, this is getting to be a habit. At least you’re conscious this time.”

Her beautiful eyes narrowed. “I’m going to kick your ass.” 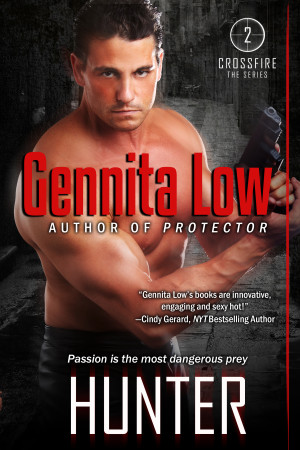