There are two things Navy SEAL Jazz Zeringue knows:
1) his black ops team will always have his back, and
2) there’s nothing more enticing than a woman of mystery

When the best of intentions gets Jazz arrested overseas, he couldn’t be more surprised to find Vivi Verreau ready to spring him out of jail. Obviously more than the civilian she claims to be, he’s sure Vivi is hiding an agenda…and he’s determined to stick by her side until he uncovers all her secrets.

A covert agent who shrouds herself in disguises, and who fearlessly jumps into dangerous situations without thoughts for her own safety, Vivi has no need for a protector. But if she is to have any hope of completing her most important mission, she’ll have no choice but to recruit Jazz and his men.

And when everything explodes around them, they will need each other more than they ever imagined…

Jazz had never hiked with a woman this long before. He had to admit it, he had had doubts about Vivi’s stamina, but she had once again proven him wrong. They had traveled at a fast click the past four hours and she had only stopped once, to take off the soggy and muddy socks he had given her. They kept an eye out for signs of life, that roving gangs weren’t nearby. Sometimes, Vivi explained, the bandits traveled this far up the mountain.

“I’ll take the risk. Besides, we’re far away enough to stop soon to signal T.”

It was getting very muggy again. He watched Vivi wipe away perspiration on his sleeve, leaving a smear of dirt on her cheek. He offered her a drink from his small canteen, then pointed at the canopy of trees nearby.

“As soon as we’ve activated your locator, we’ll head over to the shade and wait.”

“Sounds like a brilliant idea.” She smiled. “If I weren’t so tired, I’d race you over there. Besides it isn’t fair that you have shoes.”

Most women would complain about the dirt and the heat, but Vivi had not only kept up with him, but also injected humor in the situation. He grinned at the sight of her blackened feet.

“I offered to carry you,” he reminded her.

“For four hours? You wouldn’t be quite this perky,” she lightly mocked back as she handed back the canteen.

He made a face. “Please. SEALs aren’t perky.”

She grinned, then eyed a specific area of his body. “If you say so,” she said. Without warning, she started taking off the black shirt. She unhooked the front of her bra and worked a finger inside the cup, giving him glimpses of her nipple. When she looked up, her eyes had a definite twinkle. “It’s getting perky again.”

Jazz’s lips quirked. “That’s my personal locator,” he informed her.

She laughed. “Do you think, while we wait, you can get Perky to help me find something?” 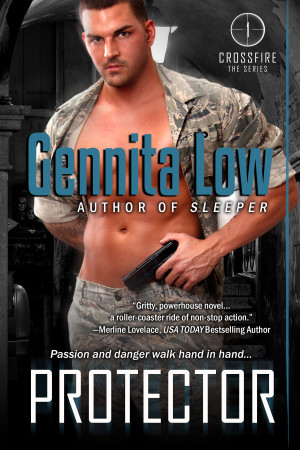