When trusting each other could be deadly….

Reed is the sharpshooter–solid, dependable, unflappable–assigned the task of winning Lily’s confidence to find the secret weapon…and eliminate her, if necessary. But this extraordinary woman’s fire and courage makes his assignment harder than any he has ever undertaken.

Lily knows that someone is pulling her string, but if she is to survive, she must put her trust in the hands of this charming but lethal man of mystery. Her head tells her she’s in grave peril, but her heart dares her to put everything on the line. Which should she follow?

AVAILABLE IN PRINT, ON KINDLE, and NOOK

He liked the way she felt in his arms. The music was a little slower than the song before, with a heady, melodic beat that was sensually inviting. She didn’t know the steps to the tango but the way she subtly swayed against him was sexy, like a woman who had secrets to tell. He deliberately pulled her closer, then inserting one leg between hers, he dipped her. He suspected that in real life, the woman didn’t like being kept off-balance, literally or figuratively, yet she allowed him to hold her that way for a few beats, her dark eyes flashing challengingly as she looked up at him. As he slowly straightened back up, he slid his hand from her neck down to her upper back, taking away her support, and thus not allowing her to get out of position.

It was a move most professional dancers used to show the mastery of one partner over the other, as the male controlled the female’s upper body. In a choreographed dance, the woman could use her arms and legs to express her emotions. She could curl one limb around her man’s leg to show a rebellious streak. She could hold on to the partner’s shoulders or lapels to signify a need for him. Or she could totally relax her entire body, flinging her arms out trustingly, and allow her master to do what he would.

Because it was a dancer’s move, he had expected Llallana to grab him out of instinct, like most people who didn’t expect the falling sensation would. Instead, she did all three-she curled the leg he had trapped between his around one of them, her knee sliding up dangerously close to his balls, at the same time one hand grabbed the opening of his light jacket and pulled hard
enough that he had to bend lower or cause the both of them to fall down. Through it all she relaxed her entire body so that her back arched up to meet him, demonstrating amazing upper body strength on her part.

He found himself staring down at the smooth silky expanse of skin that sloped into gentle mounds. He could see her nipples through the dark tight material. They were hard and erect, barely covered and he had the sudden urge to bite on the top and pull it down to reveal them for his eyes.

“Drop me and my knee won’t miss your family jewels,” Llallana said sweetly.

Suddenly, Amber’s laughter pierced through his focus on her.

“That’s Lily all right,” she said, her voice coming so clear through the hidden listening device that he was sure her friend could hear her. “Oh, by the way, R.C., don’t forget she’s skilled in martial arts. She will kick you if you drop her.”

Damn. He’d forgotten that he was miked. Reluctantly, he slowly
straightened up, keeping her leg imprisoned, his hand gliding back up to behind her neck. Her face was flushed and her eyes sparkled. Another time, another place, he would have finished this dance, and they would be naked. The image of Llallana Noretski naked came too easily. 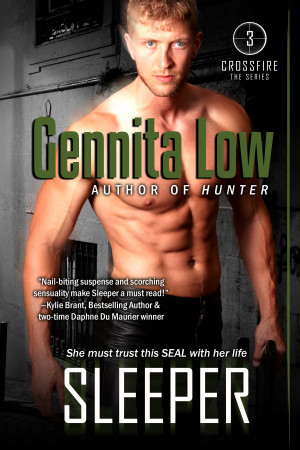